How to maintain your dignity when you've just been dumped

It’s confession time. For the first 24 years of my life I had no idea how it felt to be dumped. Up until that age it had been me that ended the relationships with various boyfriends (ranging from sweet to arsehole to now quite openly gay) and the concept of being dumped felt utterly foreign to me.
I know. I hate me too. If it’s any consolation I have more than made up for it in terrible romantic experiences since. Remember this guy. And this guy? Yeah I rest my case.

ANYWAY since I ended things with my last long term boyfriend (aka the nicest man to ever walk the planet – no one said I was a genius ok!) I’ve had a lot more experience at the whole being dumped thing.

So I thought I’d impart some ‘wisdom’ here since I’ve come to realise that all break ups, whether it’s devastating heartbreak or just ‘YOU’RE breaking up with ME’ incredulity, can be made slightly more palatable by following these simple steps.
Disclaimer: Lest I come off as preachy I’d like to point out the only reason I know about these rules are because I’ve broken them all myself. To the epic hilarity of my mates. Enjoy learning from my foolishness.
1)Don’t agree to be friends…at least not at first
‘I’d love it if we could still be friends’
Is this, or is this not, the world’s worst sentence to ever come out of someone you’ve seen naked’s mouth?
I’ve heard it twice. Do you think the result of this was a wonderfully nurtured and treasured friendship that blossomed and matured over the years?
Was it fuck.
In actuality that sentence only served to provoke an irrational outpouring of anger that resulted in me being unable to formulate a sentence correctly and saying the words ‘You should… go and do… a fuck off’
No I don’t know what it means either. Because cool, cutting quips live only in our heads ladies and gentlemen, to be thought of on the tube or when you see an Instagram of their new girlfriend doing something kooky and cute. #happyforyou
Anyway. There are many, many reasons why agreeing to be friends with your ex when you first break up is a silly and foolish idea.
Firstly – it won’t be for the right reasons.  You know it’s true. If you are the dumpee, most likely your motivation for being friends with your ex (especially in the beginning) is born from a desire to stay in their lives by any means necessary. If you are the dumper, then the offer of friendship is often a way of easing your own guilt rather than a genuine desire to hear all about what your ex-boyfriend had to eat that day.
This is what I like to call short term gain for long term pain. Dumpee’s you can expect to spend the next few weeks of ‘friendship’ staring angrily at your phone, wondering why they haven’t replied to your ‘really light hearted’ message whilst dumpers can expect to ignore said phone like it’s a bomb full of bad feelings and guilt inducing nausea. Or, you know, something a bit less doom and gloom than that.
Secondly – you won’t like what they have to say
What’s the reality of friendship? If you’re like me a conversation with my pals is basically a no holds barred, rip into the detail of everything that is going on in my life type discussion. That includes all things romance related.
Take it from someone who attempted friendship with the boy who broke her heart – there is honestly nothing worse than hearing the details of their new relationship. Maybe your ex will be kinder and spare you. But if they don’t you can’t really blame them – you put yourself out there for this didn’t you?

All I know is my ‘friendship’ resulted in me eating an entire bag of cheese balls whilst crying and stalking his new girlfriend so aggressively that I honestly do believe I may know her better than some members of her family. Ps: Hope you had fun in Turkey in 2005 babe! Loved your bikini!!

If you do end up being friends with your ex then good for you. I’m sure that there are some nice well-adjusted people out there who that works for. All I’d say is maybe give yourself a week or 300 so that you never have to hear the words ‘She’s not like any girl I’ve ever met before’. OUCH.
2) Do not go to parties where he will be there. Not even to show how fine you are.
Take it from me you are not fine. You are about as fine as Ross crying into his flan. I have one ‘ex’ (he gets the inverted comma treatment because we went on roughly five dates) who I am regularly required to hang out with and even though our breakup was ranked somewhere between the internet being down and getting caught in the rain after a haircut (actually v upsetting if your childhood nickname was Hagrid – just me?) on the devastation charts this has still been a minefield.
If you are anything like me, regardless of how much you liked or were indifferent to the guy you will do some (or all) of the following: get drunk, follow him around, be loudly cross/bitchy to any girls that talk to him, confess undying love and let yourself down completely by sleeping with him again. SIGH.

I don’t know maybe you are a together and dignified kind of gal. Pat yourself on the back! Have a biscuit or three! That’s not me and I’ve seen enough drunken sobs in loos to know it’s not very many other people either.
3) Busy yourself with things that are not other boys
It feels like the best idea in the world to get back out there as soon as you’ve had your heart broken. After one quite tough (slept in my housemates bed for a week) breakup I hit tinder, bars and old aquaintances. Hard.
When you’re heartbroken, even the most irrational actions can seem like absolutely normal and justified behaviour and this a) does not make you in any way appealing to members of the opposite sex and b) means that you will very likely end up doing some things you will definitely not be proud of a few months down the line.

I’d actually like to say now. To all the boys who may have been mentally disturbed by going on a date or three with me in the period of July 2014 – January 2015 I am truly sorry. For I was mental and you all paid the price

Case in point: Lovely Patrick* who took me out for drinks and ended up trying to coerce me into pyjamas and bed after I had taken all my clothes off without him asking me to and tried to pose seductively on an exercise ball (more on this fandago coming soon). Sorry Patrick. I hope you have a dog and a nice girlfriend who wears cardigans and makes you packed lunches.
*I didn’t change his name because…meh.
Instead take up a hobby or invest in yourself (I know I heard myself say that too). I took up a writing course and I think we can all agree that if man booker gave prizes for blogs… No seriously though maybe try a new form of exercise or something else that you’ve always meant to do but never got round to (knitting, rock climbing, calligraphy – I don’t know!) basically anything that doesn’t include sitting on the floor in your pants imaging scenarios in which you and your new boyfriend (played by Douglas Booth) snog in front of your ex while he cries and storms off. Anyone else? You Liars!!!

4) Make an effort!
My friend K said something extremely wise the other evening. When speaking about heartbreak she said that she found that whilst she mostly hated every single second of feeling so awful there was a perverse part of her that actually enjoyed it.
‘You weirdly enjoy not eating, being all pale and thin, smoking 100 cigarettes and listening to sad, sad songs – it’s like being addicted to being miserable’
And she’s right. Even though it hurts horribly we are a generation that likes to indulge. Helped along by social media we can throw ourselves into heartbreak like never before. Moody pictures of yourself with big racoon eyes in which you imagine you look like Christina Ricci but in fact actually just look like a racoon.
‘Poignant’ quotes about never chasing after people because the ones who wanted to stay in your life WOULDN’T NEED TO BE CHASED.


Yeah that stuff.
So make an effort mate. Get up, open your curtains, turn off your phone and go find your pals. You know, the ones that make you happy all the time and would never tell you that their ‘heart just isn’t really in it any more’ or that ‘being on plenty of fish whilst in a relationship is not a big deal’ (yes I know how to pick them).
Go and find them and let them help you, console you, distract you and (in the case of my dearest K) even do a drunken ceremonial dance in a bush for you.  That’s love.
And for god’s sake take off whatever lounge wear has become your staple wardrobe. And wash your hair. Yeah you do need to.

5)  Remember: It will all be alright in the end.
And if it’s not alright, it’s not the end.
LAYER THAT ON AN INSTA QUOTE GURRRRRLLLLL (or guy). 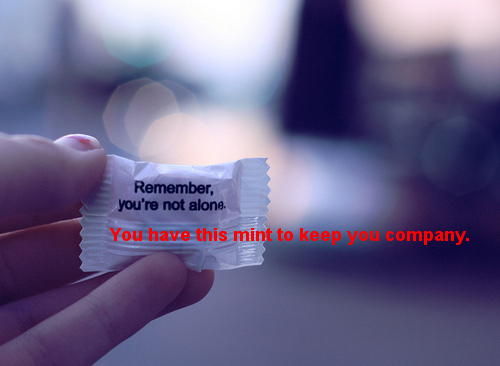