How to not give a fuck

I’ll let you into a little secret. I care A LOT about what people think.
‘How is this possible?’ I hear you cry ‘Last time we went for drinks you snogged the bartender and danced to the hits of Chicago on the bar. You quite clearly don’t care what anyone thinks.’
Don’t get me wrong. I don’t give two flying fucks if someone thinks that I am weird/not cool/borderline mentally unstable.
Where I fall down in the nonchalance stakes is that I have a terrible affliction. I am…. Drum roll…a people pleaser.

And it would seem I’m not the only one. In fact a boy I’m currently dating (no need to name him I’m sure by the next article I will have done something heinous and he shall be no more – such is life!) told me that he once ended up accompanying a girl to a doctor’s appointment because he was too polite to curtail the date before that utterly bizarre turn of events.
And for all of you laughing and scoffing at this just have a little think:
Ever gone to a truly bizarre/hideous/ just plain boring event because you said you would and you felt obliged and were unable to rescind your attendance despite the fact that you honestly stared at a car on the way there and thought ‘if this ran me over maybe I wouldn’t have to go life drawing with my weird work colleague…would that be awful or pretty bloody great….’
Congratulations you are a people pleaser.
The scary thing is we barely notice we are doing it. We go to places we don’t want to go, do things we don’t want to do and critically spend money on things we categorically don’t want to spend it on. All in the name of being POLITE.
God help us all
So when I saw Sarah Knights book in the airport I just knew I had to buy it. Firstly, because the airport is one of the few places where I feel like money doesn’t count and buying five books for a 7 day holiday is just good sense. Secondly because it said the word fuck on the cover and I felt that if any self-help book was for me, it was probably this one.

Buy it. Read it. Do what she says. If you are as chronic people pleaser as I then you will only be able to imagine the benefits this book will bring.
Here’s what I learnt about the life changing magic of not giving a fuck.
You can still give plenty of fucks about plenty of things
This is the first and most important thing to know about the art of not giving a fuck. It doesn’t mean that you just don’t care about anything. You can’t go through life giving the middle finger to everyone and everything without a care in the world. That’s just not cricket.

Knight suggests that you make a fuck budget.
Essentially you make a giant list of all the things you give a fuck about currently (in the book she splits this into handy sections such as work, family, friends etc). Then you go through the list and decide which of these things you actually care about and which you don’t.
Once you’ve crossed off the things you don’t give a fuck about you make a note of the time and energy you usually would have spent on that activity and see that as freed up time to spend on something you actually want to do.
e.g. Do you really give a fuck about Susan from accounts birthday drinks and dinner? Do you really want to spend upwards of £50 quid on that evening when you’ve only got about £60 quid left for the rest of the month? Do you really want to adhere to the strict ‘Hawaiian Luau’ dress code when you know that you will spend most of the night fielding sexually inappropriate comments from the office perv (miss you warthog!) about coconut bras and grass skirts.

Just think if you just decide you don’t give a fuck about being seen to do the right thing and attend you could spend that time, money and energy on a nice early night and then an excellent bottle of wine with your bestest pally on Friday night in the pub.
Knights philosophy is that by not giving a fuck about certain things, you can spend more time doing the things you love with the people you care about. Surely that equals happiness right? RIGHT.
Giving a fuck is emotionally and financially draining.
If you are living in London and not earning upwards of say £50,000 it’s quite possible that the week before pay day = beans on toast, plain pasta with butter and staring enviously at your much more organised colleagues pret lunch whilst you eat a slightly fizzy soup you’ve had in the fridge for ages.
If you are the kind of person who says ‘Oh is it pay day? I hadn’t realised’ well GET FUCKED. Sorry no, what I mean is…’congratulations on your well-ordered life.’
My point is, when money is tight and time is even tighter, do you really want to be spending money on tickets to things that you really don’t want to do when sitting in your pants on your sofa watching a documentary about a man with ten wives is FREE?! No, of course you don’t.
Take it from someone who once spent EIGHTY WHOLE POUNDS to see a band that she knew one song of: sitting through that concert in the knowledge that my card had been declined trying to buy a sandwich in Tesco earlier that day sucked so much that I had to go to the loo and scream silently into my hands.

Don’t get me wrong, I think spending money on tickets to things you really enjoy with people you think are fantastic is one of the most important things you can do. Why else do you work for gods sake? Is it because you just can’t get enough of getting up at 6am and standing in a sweat box with the un-showered masses? No sir it is not. It’s so that you can afford to spend £60 pounds to run around the crystal maze for example. A small price for essentially being the happiest I have EVER BEEN on a Sunday afternoon. But save it for those occasions.
So next time someone says to you ‘hey – I’ve got two tickets to this amazing adaptation of the rhyme of ancient mariner. It’s done entirely in mime. Only 70 quid a ticket…fancy it?’ what will you say?

Read on to find out!
It’s not about being rude
Let’s be honest, there are times when I’d love to respond to an invitation with ‘Hell to the actual no. I would rather have an in-depth conversation about last sexual encounter with a vicar than go to this weird play.’ But you simply can’t. Or rather you can but you’ll probably find that you’ll have no need to reject invitations as there simply won’t be any more winging your way
.

Bet you’ll be wishing you had said a big yes please to that poetry slam now aren’t you. (lol no)
But seriously, Knight is very clear about the need to be both honest and polite when rejecting an event because you simply don’t give enough of a fuck to go to it.
She gives options on how to deal with any situation depending on the level to which you do not give a fuck. Some are useful, some are just hilarious however the same rules apply to every level:

i.e.
Work colleague you only sort of like: ‘Hey do you want to come to my baby shower? It’s in South Woodford (insert any very far away place that requires train travel) at 11am on Saturday. I think you’ll probably be the only non-pregnant one but that’s ok right? Also everyone is bringing gifts I think.’
You before the book: ‘Oh gosh I’d love to, yes please. Can I bring anything. Other than the gift obvs!’
You in reality: ‘Are you absolutely mental. NO I do not want to travel two hours with a hangover to your house where I will inevitably be the only single girl, probably wearing all black whilst pregnant ladies say things like ‘it will happen when you’re least expecting it.’ Yes, pregnant lady, that’s what I’m afraid of. Constant vigilance!!!!
You after the book: ‘Oh gosh that sounds lovely, unfortunately I’m busy that day but I hope you have a lovely time! Thank you for thinking of me!’
SIMPLE AS. 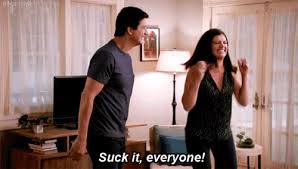 Don’t just say yes because its free
Now you know how to say no without being a dick here is another very important thing to remember.
Not spending money on something is no good reason to attend it.
Don’t get me wrong – there are plenty of epic free things to do in London. I am in the midst of compiling such an extensive list that you’ll all be rolling in your leftover cash!
However, use your discretion.
An ex-boyfriend once got me and my mother tickets to a show at the open air theatre in Regents Park. The play sounded a bit dull but hey it was FREE and CULTURAL. So mother and I skipped merrily along ignoring the fact that we do in fact live in England and are philistines when it comes to plays
.

Cut forward TWO AND A HALF HOURS LATER and we were both shivering, with plastic bags on our heads listening to a woman shout ‘ohhhhhhh joeeeeeeeeeeeeeee’ over and over and over and over and OVER again.
All I could think was…why does my boyfriend hate me so much?
An outright no is always better than a flake
This may sound simple but it has taken me years to get the hang of this one. The knee jerk reaction of the people pleaser is to say yes to things straight away and then torture themselves about it later.
Knight is quite firm here, and she’s completely right when she says: no one minds if you can’t make it but they do mind if you say you can make it and then change your mind.
I’ve now implemented the one-day rule. If it’s something I’m not immediately desperate to do I say ‘oh sounds lovely, let me check my diary’ and then I think on it. Do I have the cash? Do I have the time? Do I have enough fucks in my fuck budget?
If the answer is yes, I accept. If it’s no I say no. And guess what I don’t feel guilty AT ALL.

4 thoughts on “How to not give a fuck”